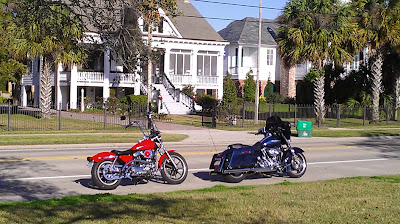 Just our continuing update of training and life.

This past Saturday I managed to get a 3 hour ride in on the trainer inside. To be totally honest it was an easy 3 hour ride.

Let me explain: No major issues! I mean really no major issues. Considering I have been doing some extra stretching and exercises to combat a lower back issue, sitting on the bike for that amount of time was fine.

I was off on my fluid intake which I have to be more deliberate about. It is a common problem for me and I proved again that I am stubborn when it comes to certain things. Next long ride I will have the bottles already filled and ready to go. I also did not take in any extra calories on this ride. Something I should avoid doing, but again, my stubborn mindset screws me up more than not.

So back on the trainer again today. I have typically be doing simple 45 minute to 1 hour workouts. Varied cadence and power, those types of workouts seem to get the most out of me.

So why the motorcycle picture? Much like the Cobra photo from the other day.... well let me correct that. Unlike the Cobra photo from the other day, I actually owned both of those bikes. The red bike I built for Seth to ride and the blue bike was mine. That was actually the best bike I owned over the years. It was also the bike I got hit on. Maybe another day and time I will buy another bike.

Now the Cobra is a dream, but hey why not right? Why not dream of owning something like that. You live, you work and eventually you kick the bucket. Why not drive something totally cool for that brief time in your life. I think a problem that I have is that we think that once we buy something we can never let it go. Maybe owning the Chevrolet C10 for so many years created that mindset. 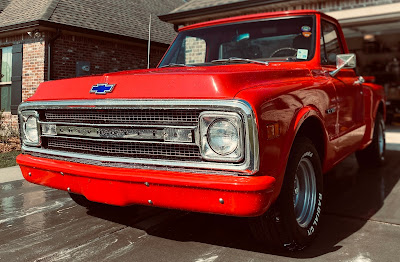 But really in the last forty years I could have owned and driven any number of cars. Being honest I have had a few in that time. A 1966 Mustang Convertible and a 1969 Roadrunner Convertible, both cars were beautiful. Actually those were in the last 25 years.

Going back forty years the list is more interesting:

Along with the 66 Mustang and the 69 Roadrunner, they were pretty neat cars. In my time on this earth I have driven some even cooler cars, but never a Cobra. I have ridden in them and washed and polished them, but never driven them out on the street.

Maybe it is getting close to the time to buy one....