You Can't Take it with you 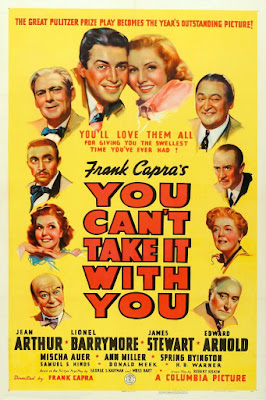 Paul's weekend movie pick for you desperate people looking for a classic!

You Can't Take It With You

Are you looking for a safe movie to watch with your family? Look no further than this classic. I fell in love with this movie about 15 years ago and I believe this movie should be watched by everyone at least once.

The film received two Academy Awards and was nominated for seven. The film was Director Frank Capra's third Oscar for Best Director.

Side Bar on Frank Capra:

Frank Capra brought us many classics in short career. My highlights to his great career would include his prewar classics such as; It Happened One Night, Mr. Smith Goes to Washington, Meet John Doe, It's a Wonderful Life, and Pocketful of Miracles.


Frank Capra offered his services to the government and made films for the military during WWII.

His story along with the story of other great directors of the time including, John Ford, George Stevens, John Huston, William Wyler and Frank Capra are featured in a book and now a documentary you can stream called Five Came Back.

In the case of Frank Capra, he came back and made It's a Wonderful Life. We understand that movie to be an incredible story and now is a staple for the Christmas season, but when it was released it was a flop and it ended up being the downfall of Capra's dream for an independent studio. His career from there out did not enjoy a huge commercial success, but he did direct a Pocketful of Miracles which is another classic that I love.

In another post I will explore the other directors and their contributions to us before and after their war service.

Well back to my movie for this day.

The list of stars is incredible but that is not what makes this movie, so what does you might ask. I think it has to do with the subject, it is about living and not worrying about certain things, as in... money. It basically says to us to remember what is truly important in life, that is family, friends, and pursuing your dreams. At least that is my take away. I ask you to watch the picture yourself and see what you take away from it.

There is a couple of scenes that I find totally worth watching. One scene is when the Kirby family comes to the Vanderhof's home for dinner on the wrong night. What they see and experience first hand is the craziness that takes place on a daily basis. I use the word craziness, but it is so funny and so freeing to some degree that this family feels free to express themselves in these ways and not be judged crazy by each other. The world might see them as a little off, but they are having fun!

The next scene is when grandpa is in jail and needs to make bail. He does not have the funds to get out of jail, but the entire community comes forward to bail him. It shows the power of friendship and being a kind person to all you meet in this world.

Well I cannot say enough about this movie. It is really a creed or a mantra that you should adapt or adopt for you life. You really can't take it with you and it is about time for you to realize that and stop chasing what is not really important in life and start pursuing what really is.... love, family, friends and just having a good old fashioned crazy time in life!!!!

I am sure that we will broach this subject again at some point.

It also seems like we might have picked up a few more readers for the ramblings of Paul. Thank you for going on the journey To Be....

I am off to the pool now, time to swim. This weekend features a 40 mile bike and a 9 mile run. Looking forward to it!

Have a great day, stay safe and healthy and in peace