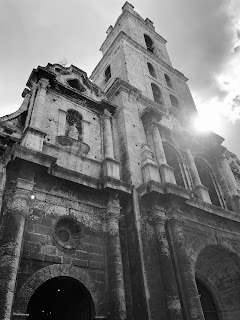 Part Two of our adventure to Havana Cuba 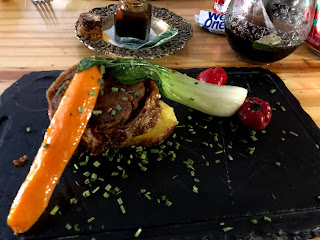 In my previous post about traveling to Cuba I made a brief mention about the food in Cuba. Our tour guide took us to a little place a few blocks from the city square.

The restaurant was small and you could tell it catered to tourist even though it wasn't close to where the cruise ship docked.

Being a typical American, I looked for my favorite, the "Cuban" sandwich. Well.... from what I can understand, there is no such thing?
My guess is that bread is not a staple in Cuba. Was I surprised, of course! And to top that, no Apple pie!

But the food we were served was delicious and worthy of a generous tip, which of course we left . The coca cola pictured were from Mexico I believe, so they were the real thing! 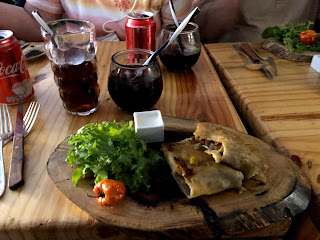 Now since I am on the subject of food. Our guide did show us some storefronts that are their version of a grocery store.

Everyone he pointed out to us was closed and did not have anything on the shelves. I gathered that since you live in a socialist country, food is provided for you? Our guide explained that everyone received a ration book and you were able to get your food with that book in hand, on certain days and if available.

Definitely something that we are not used to here in the states.


The streets in the older section of Havana were beautiful. The bricked streets flanked by what I would call old European architecture. One shop caught my eyes and I could not help but go in and watch the artist make and paint beautiful handheld fans. I bought one for Peggy. 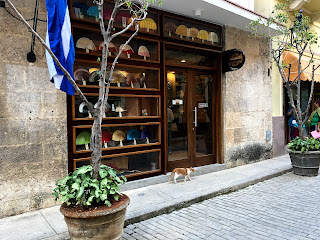 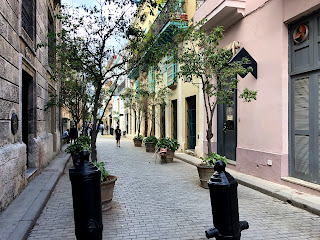 There also seem to be an abundance of antique cannons used as traffic control devices. I guess a novel idea if you have them?


To be honest with you, the old city is breathtaking to see and experience. 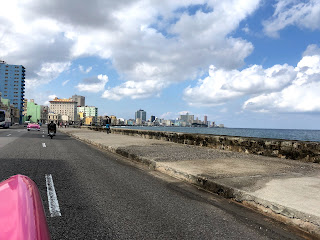 What trip to Havana would not be complete without a drive down their waterfront road. I felt like I was in a scene from Fast and Furious 8 [I think, I lose track with sequels sometimes]


Again, something that I am glad I got to see and experience. We were in a vintage Chevrolet convertible powered by an eastern European diesel of some sorts. But hey, it was fun!


Some personal thoughts on Cuba. If you get a chance to go, take it! The people of Havana that we encountered were nice. Our tour guide was a dentist. I believe he said that he was paid roughly 40 dollars a month. But there is not much you can spend your money over there anyway....
There was no new housing for he and his wife, so they live with his grandparents. Evidently for the average person that is the normal route.

Before you extol the virtues of socialism, I really think you should travel and see Havana in person. The once beautiful city is falling apart before your eyes. Buildings outside the main square are crumbling. Electrical wiring is exposed and looks like something out of the living room in the movie the Christmas Story. It is really sad to see.

I got the general idea is that there is no hope there. That is truly sad to see. Hopefully soon, things will change and the people of Cuba can enjoy true freedom.
Newer Post Older Post Home