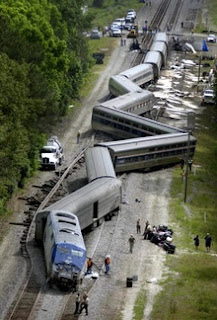 
I would assume that you know someone who life fits that description. Quite possibly you have even been involved in that train wreck to a degree. It's hard to watch someone go off the rails and not get involved, but I guess we do sometimes don't we.


It's safer to stay out of things. It's safer to just stay away and let them self destruct. I am not here to argue whether that is what we are supposed to do or not, I just think sometimes for whatever reasons we just decide to distance ourselves and watch from the cheap seats....


Now I to be honest, I am writing this from the angle that my life is not a train wreck. I can almost sound holier than thou! But I hope you would know we well enough or if you don't know me personally, you would have read back enough enough in this blog to understand that I am a functioning train wreck and I am not perfect by any means!

I could be wrong, but I might describe my life so far as "highly functioning train wreck".

I guess I would say that I am not on the standard rail system. I derailed at some point and have managed to hold it together, so that by outward appearance I look fine, well that could be debated. Subject for another day.

Which could lead to the idea of all show and no go. You have heard that expression before, all show and no go, right? Its the idea of something really flashy, like a car, polished to the nines, chrome everywhere, but under the hood or the drive train is far from exotic, actually rather plain and dull. You get the idea now...

But maybe, just maybe that describes a lot of people, actually everyone. In my many years of self discovery... [That is code for sitting across from a professional counselor and exploring what makes you  tick] I have opened locked doors, I have dug deeper, read more, learned more and explored who Paul is. Paul can look good on paper, but not have it all together at all and not be fully honest!

Can I get an Amen! Preach it brother! 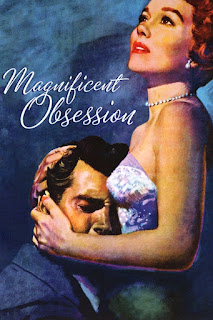 Yes that is me, a highly functioning train wreck, especially when it comes to accountability in my personal life and more importantly for the sake of this rant, my obsession with weight.

The story of a very rich man who feels he is to blame for the accident that caused a woman to become blind. After the wreck he decides to spend his life in the pursuit of helping others and finishes his studies to become a doctor.
Anyway, if you haven't seen, watch it please.

Recently I figured out that I have a body shaming issue. I see my self as not only fat, but not attractive by any means. Yes you heard it here, I am not Rock Hudson.... [In more ways than one....Not that there is anything wrong with that]

How did I discover that and what the heck does that have to do with accountability you might be wondering.

I let myself go at some point and once you have done that, it is hard to get back. I read and see stories of people who lose weight, let's say 40 or 50 lbs. To me they didn't look fat to begin with! But they are cover stories on how to change life and get leaner and more toned abs. Too funny! Really, that's not a challenge, 40 or 50 lbs, lets try 200! [God bless you if you only have to lose 40 or 50 lbs, I am not trying to minimize your accomplishment]

Once you have hit the morbidly obese button on your life it is hard to come back to the normal side of things. In this long journey of life, my train wreck, I have been more than 200 lbs over my suggested body weight. I have lost almost 200 lbs and still needed to lose another 30 to 40 lbs and ran out of steam....

Back on track.... How did I get so fat? You know how I did it? Lack of accountability and the inability to deal with stress [the normal and sometimes abnormal demands of life] So much so that I found comfort in foods that brought comfort to me and food became a reward even after I began to get the out of control eating under control.

Scratch your head please right now, take a smoke break and ask yourself why am I reading this....

You see my lack of accountability got me here. I almost typed that it was the inability of others to tell me the truth, friends, loved ones, doctors that got me here. But holy shit, I was just getting ready to add a layer of defense to my reasons for being morbidly obese. The lack of honesty of others.... Too funny isn't it. Well that is what we do, we lie....

It's not their fault! People aren't honest, that is a definite problem for sure [Post for another day] but is it there fault for my weight issues, not a chance! I have to own it, I am the liar....

Fat people, or just this fat person, have to be accountable. Just like anyone else with any other type of addiction issue.

You see all the hard work that I have done for the last 7 years was almost thrown out the window. For the last two years, I have slowly put weight back on... Yes the fat man has reared is ugly head again. It really has shown up since COVID-19 made the scene. I put on more than the 19 lbs that everyone claimed to have gained or lost.

I did say above "almost".... The train is being up righted as we speak... My come to Jesus moment has happened [again] because I realized that I don't want to live like this.

[Sidebar] I often feel like I can't help it. Its depressing to say the least. I want to cry honestly..... So often I felt like I don't want to live but I am to chicken to do anything to make that happen. Maybe I was doing that by eating my to an early grave. It makes sense in some ways.

Well we will see... the proof will be in the pudding as they say. All show and no go has to take a back seat. The BS has to stop, the train has to get moving and Paul has to live with being accountable...

I started taking a pill, don't worry its not illegal! It is an appetite suppressant. It has some funky side effects, but hey that is life isn't it. No pain, no gain...

I have about a months worth of this little nasty pills and we will see if it is enough to kick start a downward progression on the scale and in the waist line.

If you are still reading, I bet you thought you were going to learn something about being accountable and now you have realized that this was about me... Well "Hello" this is my blog! Go write your own if you feel the need to fix the world, because as you have figured out, I have my own problems and accountability is one of them.

Peace out my two or three readers....

Time to bike and run today, sermon got finished yesterday

Have a safe day out in the crazy world of ours