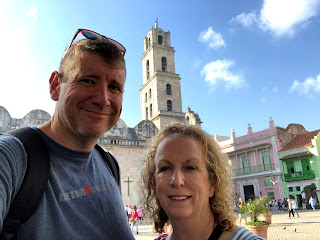 Who wouldn't jump at chance to travel to Cuba?

Last January we had the chance to travel to Cuba on a cruise ship with an overnight in Havana.

It is a beautiful city with a proud people who have to continually overcome to live.

It is sad though that much of the historic city is crumbling before your eyes. 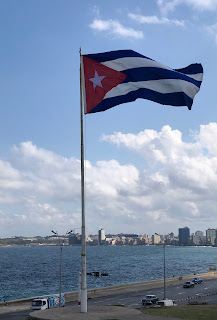 Our tour guide shared his understanding of the background and design of their flag and it seemed to be right in line with what I found when I searched the web.

The three blue stripes represent the three departments in which Cuba was divided at that time, the white purity of ideals, the light; the red triangle, originating from the French Revolution – and the three ideals of liberty, equality and fraternity: red for the blood and the courage; the star was the new state that should be added to the United States.

Interesting, they wanted to be a part of the United States.... 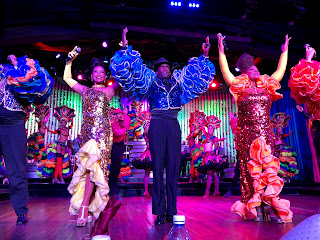 Because we docked and stayed overnight in Cuba, we got to catch a dinner show that told the story of the Cuban people, at least that is what they  told us it was about. Since I do not speak Spanish, I had to go with it and enjoy the music and the colorful costumes of the performers.

It was a fun evening and we invited our tour guide to attend the dinner and show with us. He said it was the first time he had seen the show his entire life! 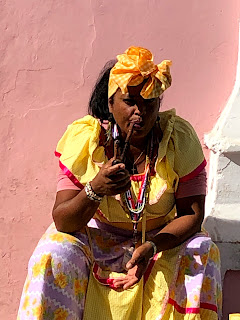 The beauty and history of the people of Cuba came alive for us!

Across from where the cruise ship docked, the city had a historic square area.

A church and government buildings surround the square.

Some locals come to this area to share with the tourist the traditional dress and customs of Cuba and try to make a few dollars to live on.

As you move away from the main square, cigar vendors are everywhere and as you mover further away from the square you can begin to truly explore the historic buildings and culture of Havana and the Cuban people. 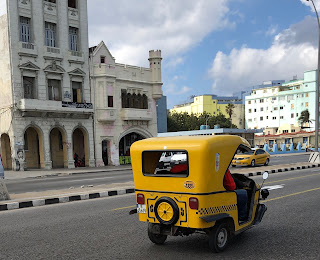 A driver and two passengers in something that has no protection....

As much as I wanted to ride down the iconic streets of Havana in the banana taxi, my wife would not agree to that version of crazy even though it is cute! 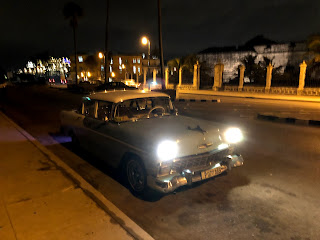 If you don't know already, I have a love of classic cars. Because of the political history of Cuba, it appears that American cars stopped appearing in Cuba sometime in late fifties or very early sixties. The cars that I had a chance to look at were very neat to say the least. They have survived all these years solely by the ingenuity of the Cuban people. Mid fifties cars once powered by small block American motors had long been replaced by four cylinder diesels and really whatever they have found to make the car move down the road. In many ways, it's really impressive to see these beauties still on the road and what the Cuban people have to do to survive is a testament the spirit and ingenuity of man.

Currently I believe the travel ban is back on for Cuba. I am glad that we got the chance to see Havana and learn more about the Cuban people.
Would I go back? Yes, I would love to go back and spend more time in Cuba and learn more about the people of Cuba.
So if you get a chance to go, take advantage of the opportunity and go! You will not regret it.
Oh, just don't expect to find your American version of a Cuban sandwich.... [A story for another day]